Holiday Fun Facts: The Mystery of the Christmas Poinsettia

Seeing a Poinsettia plant in my living room is, for me anyways, a floral sign that the Holidays have arrived. However, I don't really know that much about these plants. So like any bored office worker, I went to Google to find out the truth!
First, did you know that the Poinsettia is a native of Mexico? Known as "Cuetlaxochitl," the Aztecs used the Poinsettia to make red dyes and to treat fevers.

The Poinsettia was named after Joel Roberts Poinsett, the first U.S. Ambassador to Mexico.
"Appointed by President John Quincy Adams in the 1820's. Because of his interest in botany he introduced the American elm into Mexico. During his stay in Mexico he wandered the countryside looking for new plant species. In 1828 he found a beautiful shrub with large red flowers growing next to a road. He took cuttings from the plant and brought them back to his greenhouse in South Carolina. Even though Poinsett had an outstanding career as a United States Congressman and as an ambassador he will always be remembered for introducing the poinsettia into the United States," (The Poinsettia Pages, University of Illinois).
The Poinsettia owes its modern Christmas importance to a little girl. As legend has it, a Mexican peasant girl, distraught by being unable to afford a birthday present for Jesus, was inspired by an angel to gather weeds and place them on the alter of the local church. Those weeds then sprouted bright red flowers.

MYTH: Poinsettias are horrifically poisonous! You will die if you consume the milky sap on the inside of their leaves! Ok. Don't go crazy and eat an entire plant. Poinsettias are still a little poisonous. But you'd probably have to eat dozens of leaves to feel the negative effects. 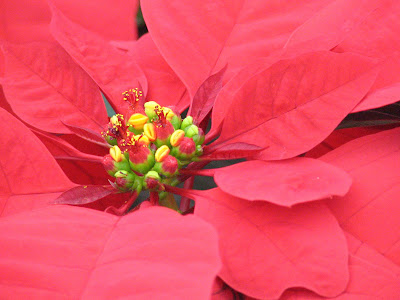 December 12th is National Poinsettia Day! Make sure that you're halls are decked with the best and brightest Poinsettias!